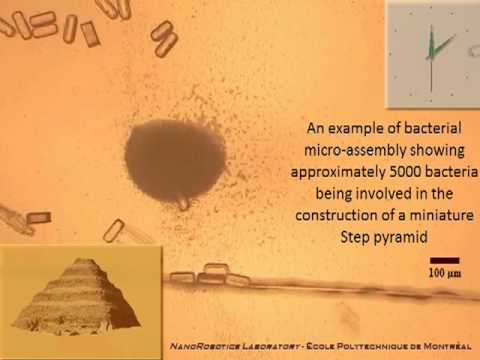 Forget nanobots. Who needs 'em? Since apparently we can now directly control live bacteria and make them do our bidding. I'm in awe.

The feat was accomplished - and extensively documented in the video above - by researchers at the NanoRobotics Laboratory of the École Polytechnique de Montréal. The bacteria in question are known as magnetotactic bacteria, which have internal compasses that respond to the pull of a magnetic field. The research team used just such a magnetic field to bunch the bacteria together en masse and manipulate their movements to accomplish simple tasks.

While assembling a pyramid is a fun exercise, the practical applications down the road may involve nanobots after all. The scientists have already navigated a grouping of bacteria through the blood stream of a rat; in the future, they'll use that same technique to create a bacterial propulsion system for larger nanobots.

Pretty amazing stuff; all the more so that we actually get to see it happen. [IEEE via PopSci]