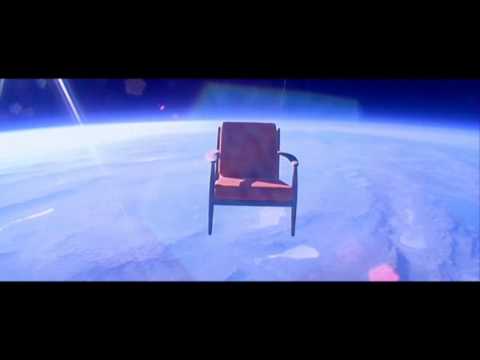 The latest object to shoot high-def video from the edge of space is… an armchair. To promote its REGZA SV LCD TVs (LED backlight, local dimming), Toshiba trekked into the Black Rock Desert with a helium balloon. This is the result.

This is the first part of the ad. The second half for their Satellite T Series ULV laptops will come out next year. [Toshiba UK via Engadget]

Facts about the shoot:

• The shots were taken at a staggering 98,268 feet above the earth using Toshiba’s own cameras
• To reach the altitude required and to conform with Federal Aviation Administration regulations, the weight of the rig had to be carefully managed to a weight of no more than four pounds
• Tied to the rig was a specially created full-sized model chair made of biodegradable balsa wood – the chair was made by a company called Artem and cost about £2,500
• Launch coordinates of the rig were – 119 degrees, 14 minutes by 40 degrees, 48 minute (12 miles North-East of the town of Gerlach, Nevada)
• The quality of the footage from the Toshiba IK-HR1S cameras was: 1920×1080 pixel count; 1080i @ 50hz; 100 Mbps
• The temperature dropped to minus 90 degrees when the chair reached 52,037 feet
• The chair took 83 minutes to reach an altitude of 98,268 feet where it broke and took just 24 minutes to fall back down to earth with the rig.