The Lung Flute Lets You Play The Soulful Sounds Of Phlegm 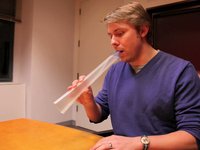 The Lung Flute isn’t an instrument, really. Instead, it’s a disgustingly awesome object that dislodges all the pesky mucus hanging out in your lungs. I want one.

As you can see in the video above, you simply blow into this thing and it uses sound waves to vibrate all the mucus out of your lungs. Then, all you need to do is cough up some serious loogies for the sweet relief you so desire.

Today, doctors in Japan use the $US40 Lung Flute as a tool to collect sputum from patients suspected of carrying tuberculosis, and in Europe and Canada it’s used to help test phlegm for lung cancer. Clinical trials in the US have shown that it is at least as effective as current COPD treatments. At press time, Hawkins expected the device to receive FDA approval any day, and says the reusable device could also provide home relief for patients with cystic fibrosis, influenza and asthma.