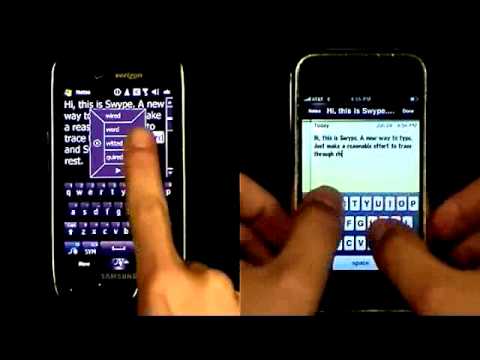 QWERTY is pretty much the king of smartphone text input. But there’s a new challenger on the horizon. It’s called Swype, it works with one-hand input and, yeah, it is pretty fast.

Yes, the first thing you may notice is that Swype technically uses a QWERTY layout. But instead of pushing each key individually, you drag your finger from letter to letter.

It’s tough to tell if the speed gains are legitimate, given this video has been created by the Swype camp. I will say, however, given that this demo is one hand vs two, the technology certainly holds its own. What do you think? Would you be willing to part with traditional QWERTY to spell words through nonsensical doodles?

Swype will debut in Verizon’s Samsung Omnia II arriving early next month before making its way to an unnamed Android phone next year. [Swype via TechCrunch via http://www.ohgizmo.com/2009/11/24/verizons-samsung-omnia-ii-to-be-first-to-sport-swype-text-input/?utm_source=feedburner&utm_medium=feed&utm_campaign=Feed%3A+Ohgizmo+%28OhGizmo!%29]