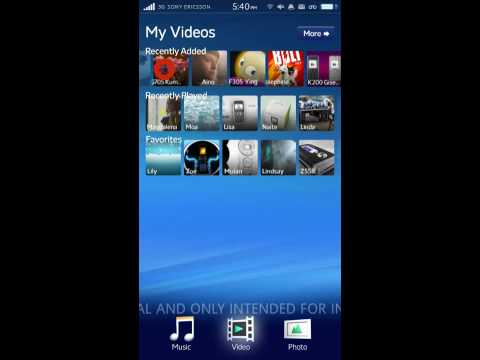 I like Android and all, but one thing the iPhone absolutely kicks every other smartphone’s arse at is media playback—until now. This video of Sony Ericsson’s “Rachael” Android UI shows its media capabilities, and it looks un-freaking-believable.

Looks like Sony Ericsson borrowed heavily from the Zune HD playbook for this one, but we’re not complaining—the Zune HD has the only media UI that’s capable of competing with the iPhone’s. Let’s count the influences: First is the homescreen, which has a layout very similar to the Zune HD’s QuickPlay menu. Instead of just giving you a boring list of Artists, Albums, and Snoooore, it shows favourites (like the Zune HD’s Pins), Recently Added and Recently Played, not-so-coincidentally the exact same options in the Zune HD menu. Below that you get two options from PlayNow, a kind of Pandora-like Sony store, including Top 30 and Recommendations.

At the bottom of every screen is a crossbar much like the Zune HD’s, but that one’s legitimate Sony—they pioneered that UI with XMB on PS3 and PSP. It’s a great idea, so we’re glad it shows up here as well. Other Zune HD influences? How about the art on the artist and album pages? When selecting Kanye West from the artist list, a photo of his smug little puffy mug shows up on the top of the list of albums, and when selecting his album The College Dropout, the album art pops up above the tracklist—just like on the Zune HD.

Of course, a warning before the video says that this is for conceptual and internal use only (whoops!) so for all we know, Rachael’s media playback won’t look anything like this. But we hope it does—Android’s music playback software is embarrassingly dated and this video shows a level of gloss that frankly blows me away.

In case that was all too long for you? I want this thing. Right now. [SE-Blog via SE-Nse, thanks Scotsboyuk!]