An illustration of the Mars Express spacecraft which launched in 2003. (Illustration: ESA)

A Mars Spacecraft Has Been Running on Windows 98 Era Software... 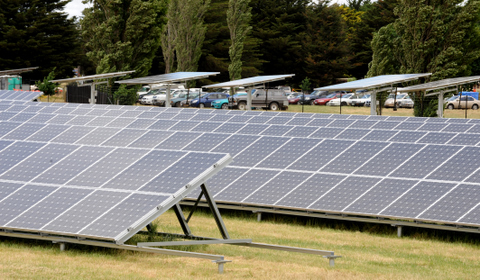 Down in Ballarat, Sharp and Origin have joined forces to create the Ballarat Solar Park, a 14,993 square metre park with solar tracking panels to follow the sun for optimum energy harvesting.

The park, which produces enough renewable energy to power about 150 homes, opened on Saturday November 28. According to the press release: “The Park is expected to generate approximately 420MWh of solar energy each year which will prevent approximately 567 tonnes of carbon emissions being released into the atmosphere each year.” Nice.

With 50 years of experience in providing innovative solar technology, Sharp has firmly established its position as one of the world’s powerhouses in this technology. This experience has been further extended into design and construction of major solar farms around the world. In the Australian market Sharp Corporation has formed a firm alliance with Origin, Australia’s leading integrated energy company to provide a range of quality and reliable solar photovoltaic (PV) solutions to homes and businesses. This partnership has provided the opportunity for Sharp to design and construct a solar PV park which is an innovative concept in Ballarat. The Ballarat Solar Park includes tracking panels which are a unique innovation designed to follow the sun in order to capture the maximum amount of sunlight to generate more renewable energy than the standard solar fixed installations.

The Ballarat Solar Park is one of several initiatives from the Central Victoria Solar City project and part of the Australian Government’s $94 million Solar Cities Program. The Park officially opened Saturday, November 28.

Central Victoria Solar City consortium member Origin was responsible for managing construction of the Park, which was designed and constructed by lead contractor, Sharp Corporation on behalf of the Solar City project. The 300kW Ballarat Solar Park is expected to produce enough renewable energy to provide 150 households with solar power which is approximately the equivalent of these households installing a 2kW solar PV system on their roof. The Park is expected to generate approximately 420MWh of solar energy each year which will prevent approximately 567 tonnes of carbon emissions being released into the atmosphere each year*.

Located at Ballarat Airport, the area for the solar park is approximately 14,993 m2. The Park has a series of educational panels to help people visiting the area to learn about solar, renewable energy, how it works and its benefits. The park also has a viewing platform where visitors can view the solar installation.

Sharp’s Deputy Managing Director, Denis Kerr said, “Ballarat’s Solar Park and the Central Victoria Solar City project is a great initiative and one Sharp is proud to be a part of. It is an innovative way of generating local and renewable energy for now and the future.”

Sharp has pioneered solar gains in engineering, design and implementation of photovoltaic technology. Since the first mass-production of solar cells and installations of solar cells that powered navigational buoys in 1963, Sharp’s experience and dedication has led to innovation after innovation: developing solar cells for space-based satellites, inventing the first solar powered calculator, creating solar panels that can be used as exterior walls for skyscrapers, and manufacturing revolutionary thin-film solar panels that could lower the cost of generating electricity.

Sharp’s solar future is getting brighter. Sharp is constructing one of the world’s largest thin-film solar cell plants in Sakai city, Osaka Prefecture, Japan, which is scheduled to come on line by March 2010, embodying the solar commitment that Sharp has demonstrated for decades.

For more information about the Solar Parks or the Central Victoria Solar City project, please visit: www.centralvictoriasolarcity.com.au or call 03 5479 1900.