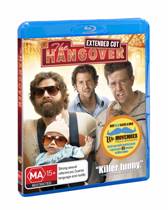 If you haven’t yet picked up a copy of The Dark Knight on Blu-ray, you should probably do yourself a favour and hold off until next month. Because during November, Warner Bros are going to donate $1 from every sale of 31 specially marked Blu-ray films, including Batman Begins, The Dark Knight and The Hangover.

Considering Movember raises money for men’s health issues, in particular prostate cancer and depression, and the fact that most Gizmodians are men, this is a great initiative to raise money for a great cause, especially if it saves your life.[imgclear]

Warner puts the Mo in Movies

Warner Home Video is getting on board with Movember this year and doing its bit to change the face of men’s health, by helping to raise awareness and funds for prostate cancer and depression in men.

In support of Movember, Warner is putting the Mo in movies through a range of Blu-ray titles. During November, thirty-one (31) Warner Home Video titles will be sporting a blue Movember moustache on their box covers, with every specially marked pack representing a $1 donation to Movember causes.

Mo Bros and Sistas will be able to enjoy classics such as The Hangover, Batman Begins, Heat and The Dark Knight, whilst simultaneously raising funds for Movember from the comfort of their living rooms. Each movie being available on Blu-ray will mean that the picture quality will be up to five times sharper than DVD and the sound will be up to three times better than DVD.

Warner Managing Director, Roger Clarke said, “As a company, we are thrilled to be helping Movember raise funds and awareness for men’s health. We want Australia to buy Blu and Save a Bro! Our Movember collection of Blu-ray releases makes it really simple to do so through any of our outlets across Australia. Moustaches and film have a well documented and celebrated history together with leading men and their moustaches gracing the screen since film began – icons such as Charlie Chaplin, Clark Gable, Peter Sellers, Burt Reynolds, Prince and, of course, Tom Selleck have firmly secured the Mo’s place in entertainment history.”

Movember Founder, Luke Slattery, continues, “Movember is all about doing something with your mates, for your mates. So, as well as growing a mo this year, we want all Mo Bros to get better at looking out and checking in with each other. If you haven’t seen a mate for a while, then get in touch and arrange a time to catch up. For this reason our partnership with Warner Home Video is a great fit as a night in with the boys watching a couple of Blu-ray’s is the perfect way to check in with your mates.”

Warner Blu-ray titles, supporting Movember, will be available from all leading Blu-ray retailers including JB HiFi, BigW and more.