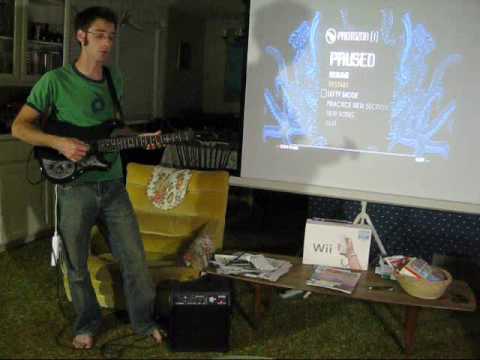 Young Alan here would like to show you how his OpenChord V1 guitar—an actual, string-having guitar—can be used to control everyone’s favourite rhythm game. Warning: If you ever want to play Guitar Hero again, don’t watch this video.

I’ll grant this: it’s pretty neat what the OpenChord does, plugging into the Wiimote and convincing the console that it’s a controller, and converting your finger presses into button inputs. It’s a funny concept, and it’s executed well. But somewhere around 40 seconds in, something happens that vindicates every feeling of unease and confusion anyone has every had about concept of rhythm gaming. For perhaps the first time ever, we hear what these games’ mechanical fret-bashing translates too, in real musical terms.

To be fair to the OpenChord crew, who sell V1 kits so you can reenact this whole wretched scene in your own basement, they regret leaving the guitar plugged into an amp:

If you unplug the guitar, you don’t really hear it, and if the slight sound is still too much, you can just tap the pick against the strings instead of a full strum…Yeah, what an embarrassing mistake!

Too late guys, the damage is done. Activision: SHUT IT DOWN. [OpenChord via Joystiq]