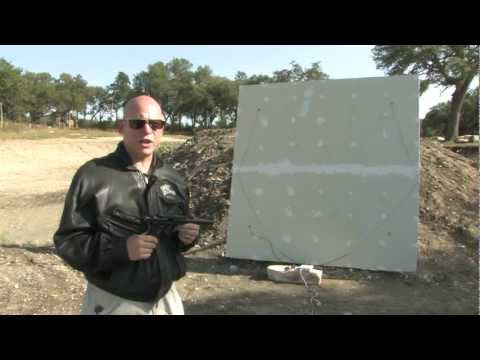 I have, and always will, reflexively defend videogames against annoying “murder simulator” accusations, but the guys at Waterloo Labs, who have figured out how to use actual firearms to play first person shooters, aren’t making my life any easier.

The setup is dead simple, all puns intended: Four accelerometers are stuck to a hard wall, where your FPS is projected in real time. Players shoot said wall, with guns. The intensity of the vibrations in each accelerometer is measured to determine where exactly on the board the bullet impacted, which is fed into the host PC, where the coordinate data is translated into an aimed, in-game shot. It works a lot better than you might expect, not just with bullets, but with shovels, too.

If you belong to the very select demographic of people who own a gun, a projector, some lab equipment, and have access to firing range, as well as some some expertise in DIY building and programming languages, Waterloo Labs (predictable tagline: DIY Projects from the Heart of Texas!) provides instructions so you can build this setup yourself. Note: They haven’t totally worked out the bugs in the respawn code yet, so aim carefully. [Waterloo Labs via Slashdot]