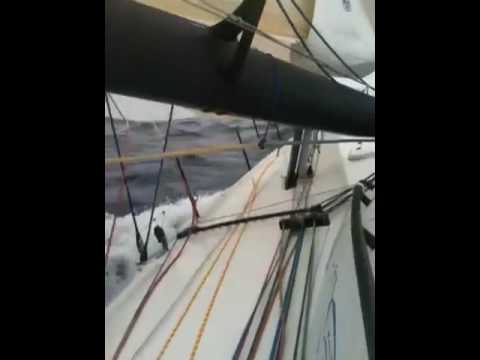 July 8, 3:30 PM PSTPegasus has been chewing up the miles and we are very lucky for that. Our last two days were 305 and 295 nautical miles respectfully.

We like our heading with a lot of West and a bit of South in it, averaging about 255 true. Tactically and strategically we’re able to achieve our goals.

However, we never take anything for granted and keep on crunching a lot of weather information. We’ve been consistently reading 1019 on the barometer, which means that we are sailing down the 1019 isobar. We feel very comfortable with that.

At this morning’s schedule, we saw that a lot of boats were heading North. That would mean a rapidly rising barometer and ultimately a “spin into the high.” So we like what we are doing. All the automated routing programs seem to point to a Northerly track. We’re contrarians and disagree. We’ll know soon enough. *

We’re settling into that routine where Crusty watches the days and I watch the nights. It’s almost like our day to day schedules! Except that we’re riding the wind fast to Paradise!

Essentially it’s about gauging what the weather is going to do and where to go for the best wind. High pressure systems are fair weather and light winds (i.e. slow sailing). Low pressure systems are stronger winds (potentially stormy). So sailors watch the barometer carefully as indication to how the weather is changing around them and to give them clues on where to go. So it’s a game of how far are you willing to deviate from the shortest straight line path between L.A. and Hawaii to get stronger wind.

Isobars are like contour lines on a topographic map except they indicate regions of equal atmospheric pressure instead of altitude like they do on a topographic map. So when you look at a weather map and see lots of isobars stacked up very close together, it means that there will be lots of wind there due to the big pressure gradient. So sailors watch the barometer as an indication of how the weather is changing and to give clues on where to go.

Philippe Kahn founded Borland, invented the Camphone, and decodes human motion. He’s also a fellow outdoorsman, splitting time sailing in Santa Cruz. He’ll share his Transpac 2009 sailing race with us live from the Pegasus Open 50. He and Richard Clarke set the race record for a double handed team in 2008 with a time of 7 days, 15 hours, 17 minutes and 50 seconds, besting all boats in overall time for that year.
[Previous Pegasus Sailing posts on Gizmodo, Pegasus]