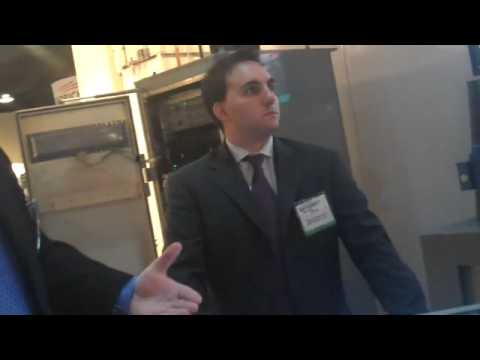 The video is eight minutes long, but absolutely worth the view since it’s hard to describe what it does in words (even if the quality is really bad.)

Called Global Situational Awareness the system seamlessly puts together geographical information and schematics with material from countless sources in the battlefield: Unmanned Aerial Vehicles, AWACs, satellites, ground-level radar, reconnoissance units… anything that is connected to the battle grid will be mixed into one single tactical plan.

The result of this advanced information merging system—for a lack of a better term—is then shown in a touch display, which is used by the people in command to access all the information in a comprehensive way. To do it, the system has different applications that allow to show and mix this information with different levels of transparency, in 2D and 3D, all manipulated using gestures and simple icons.

The level of sophistication of this system—developed in three years by DRS technologies— is simply amazing, making current battlefield displays look like a Napoleonic Wars map with lead soldiers on top. This is like the crazy made-up stuff that you can see in series like 24 or Tom Clancy movies, but for real. [Defense Tech]