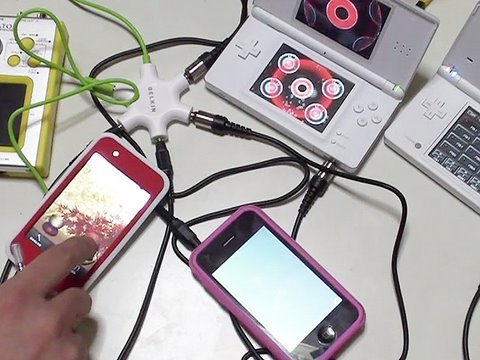 Here’s an oldie but goodie to start your morning. Seems that with a little bit of time, a duffel bag’s worth of gadgets, and a Belkin headphone splitter, one could create a satisfying little hook.

If one were so inclined anyway.

The setup features various music apps (like the quirky Elektroplankton) playing on a Nintendo DS, DSi, iPhone, iPod Touch and a Kaossilator.

The beat begins with some tribal drum action, before what sounds like the NBC theme kicks in alongside some spacey beeps and bloops. Soothing holiday-esque bells take us out, and the whole thing is played by what appears to be the giant hand final boss from Super Smash Bros. Did I mention I play video games? [YouTube via Gearcrave via Wired]