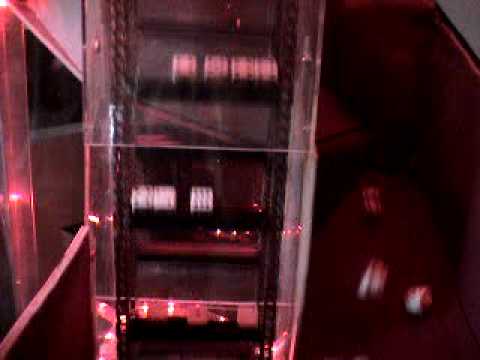 And now, an ingenious solution to a problem that you didn’t know existed: the Dice-o-Matic can make over a million dice rolls a day, supplying genuinely random results for an email-based card and strategy gaming service.

The Dice-o-Matic is basically a seven-foot-tall vertical conveyor belt, which rolls and cycles its dice by carrying them to the top of the assemblage on little shelves, then sending them tumbling down to the bottom to repeat the whole process again. The results of the rolls are recorded by a camera, which is triggered each time a scoop passes by, and processed by a laptop with custom-built die-reading software.

If that sounds familiar, it’s because the same site—GamesByEmail.com—built a much smaller rolling machine out of Legos back in 2005. Since then, they’ve outgrown its 80,000-a-day rolling rate, which the new mega-roller can pull off in about an hour and a half.

The machine’s designer goes into more technical detail on this project page, but it takes a video to really do this system justice. [GamesByEmail via Reddit]