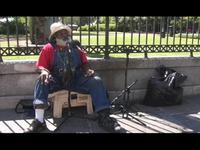 If this video doesn’t bring a tear to your eyes and makes you smile for the rest of the day, you are a cold hearted bastard. Watch it from beginning to end—you won’t regret it.

This cover of Stand By Me was recorded by completely unknown artists in a street virtual studio all around the world. It all started with a base track—vocals and guitar—recorded on the streets of Santa Monica, California, by a street musician called Roger Ridley. The base track was then taken to New Orleans, Louisiana, where Grandpa Elliott—a blind singer from the French Quarter—added vocals and harmonica while listening to Ridley’s base track on headphones. In the same city, Washboard Chaz’s added some metal percussion to it.

And from there, it just gets rock ‘n’ rolling bananas: The producers took the resulting mix all through Europe, Africa, and South America, adding new tracks with multiple instruments and vocals that were assembled in the final version you are seeing in this video. All done with a simple laptop and some microphones.

I don’t know about you, but it blew me away. Best version of Ben E. King’s classic I’ve ever heard in my life. And I’ve probably heard between five and two billion of them. [Thanks to my friend Fernando]