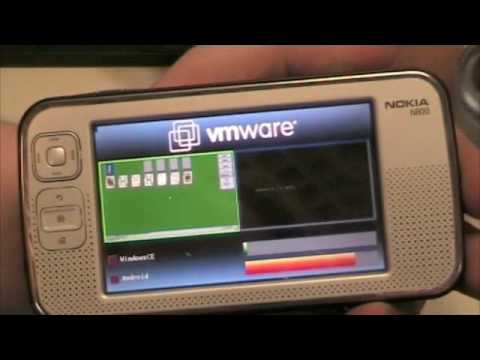 Ok, this is even cooler than we expected: a Nokia N800, loaded with VMWare’s MVP hypervisor, is seen here running Windows CE and Android, at the same time. This is a big deal!

What you’re watching is, admittedly, virtualisation. The MVP hypervisor is a small (20KB) “bare metal” virtual machine which runs beneath the phone’s OS(es). What this effectively does is create an identical platform on each and every device it’s installed on, allowing OSes to be installed like apps (as in desktop virtualisation, they’re called “appliances”). Since it’s the virtual machine that interfaces with the device’s hardware, you can pretty much run any OS without worrying too about driver compatibility, or, as shown above, even run multiple OSes at the same time.

What’s especially surprising about this is how well it seems to work. Windows CE, which isn’t even technically a mobile OS,(yes, it is, but it’s not anything someone could use for a phone) runs well, and Android’s 3D spinning globe runs about as quickly as you’d expect it to on the N800’s hardware. Though the N800 isn’t a phone, the rep in the video makes it very clear that MVP is headed for smartphones, and so it should.

VMWare says they’re in talks with manufacturers, who would have to include the hypervisor in their handsets for this to be possible. Problem is, I’m not sure what exactly would motivate a company to pay to licence this tech in their handsets. Hardware virtualisation, parallel mobile OSes and hypervisors are all a little esoteric for mass marketing, and I’m not sure that “John at Gizmodo totally has a boner for this” will be enough to push HTC over the edge. [ITPro via WindowsForDevices]