A Foldable Pixel Could be Coming, According to a Leaked Document

Will Cryogenically Frozen People Ever Be Revived?

I’ve stomped a lot of Time Crisis pedals in my day, boy. And now, the gold standard in duck-and-cover arcade rail shooters is on the iPhone. How is it?

The App: Time Crisis Strike, by Namco. Played by many of us with light guns and stomping pedals in the arcades of our youth.

The Verdict: Fun enough, but just not the same, man. The great thing about Time Crisis in the arcade was that you felt like you were actually ducking behind incoming bullets, molotov cocktails and knife-wielding crazies. That, and the real gun kicking in your hand (if it wasn’t broken) were the essential gameplay elements. And maybe I’m just jaded, but tripping the iPhone’s tilt accelerometer forward to duck and tapping the screen with a finger just doesn’t quite capture that magic. You feel like the kid who clanked the muzzle of the Nintendo gun directly against the face of the TV to play Duck Hunt.

Then again, if you can detach yourself from the past, Time Crisis Strike is not bad. Plus, it’s on your phone, and it’s cool that even just a little taste of the duck-and-cover gameplay magic is still present.

The game consists of only three levels, which you’ll make it through pretty fast. Those three stages, plus five quick challenge-based mini games are all there is here, so if you want an epic unfolding story line or a great deal of variety, you’re out of luck. Maybe updates will bring new levels (Namco was pretty quick with the updates to fix I Love Katamari).

So if you’re a huge Time Crisis fan, this is probably worth a pickup. Just don’t expect to be hypnotised like you were twelve years old again. [Time Crisis Strike]

Here’s a gameplay video from the folks at Touch Arcade, who also have a review up here. 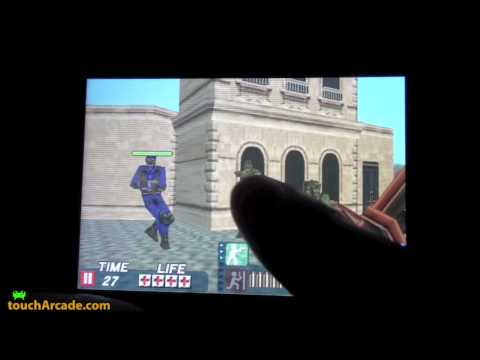