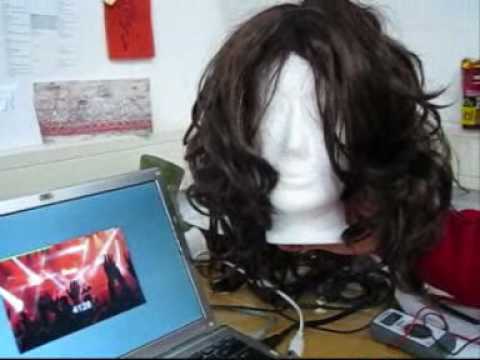 It’s the next obvious step in the progression, and the one essential ingredient Rock Band forgot: Strap on Headbang Hero’s accelerometer-equipped wireless wig, flash the horns, and show those emo girlymen how it’s done.

It’s just a concept piece for now, but the three metalheads behind the project seem like they’re intent on selling some or all of it, some day. It uses an Arduino controller to process the input from the wigs accelerometers, then outputs it to a custom game written in the Processing language.

If some sort of jeweled headband controller doesn’t find it’s way into the next version of Rock Band, I will be disappointed. [Headbang Hero via Kotaku – Thanks, Mike]