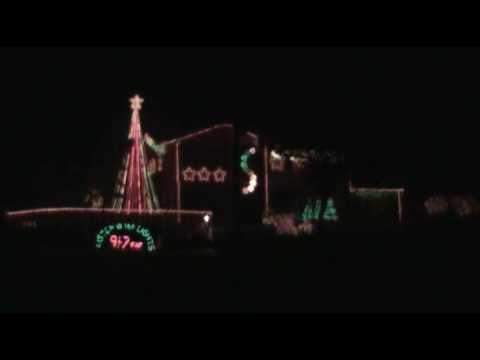 I always thought that the Christmas lights around our suburb were pretty awesome, but after seeing this, I know that Brisbane is the place to go for a really awesome light show. Michael Sallaway used over 70,000 lights, which are completely computer controlled on over 300 individual channels. Micahel designed and built the controller boards himself, and then did all the synchronisation to the music by hand using the free Vixen Lights software, taking about 30 hours to code the entire song.

There are speakers for people to listen to the music at the house, but people driving past in their car can also tune their radio to 91.7, where they’re broadcasting the sound over a low-power FM transmitter. And they’re also collecting for the Royal Children’s Hospital Foundation, so if you do swing by to check it out, make sure you take some change to drop in their money tin.

We managed to catch up with Michael about his masterpiece:

Giz AU: How long have you been Xmas lights for?

Michael Sallaway: This is actually my first year — after we drove around looking at
Christmas lights last year, my other half suggested that we put up “a
few Christmas lights next year”.

I’ve also been really interested in a lot of the American houses that do
animated Xmas lights that I’ve seen on YouTube in previous years; after
I saw that, I figured “I can do something like that!” So I started in
about December last year — took pretty much all year to plan, prepare,
build, synchronise, etc….

Giz AU: Roughly how much cash have you dropped setting all this up?

Because I designed and built everything from scratch (designed my own
PCBs, put them all together, built the boxes they go in, built all the
props from spare materials) I saved a bit of money. Also, instead of
buying a heap of lights from retail stores, I cut out the middleman and
imported about 1500m of rope light and 600 sets of fairy lights direct
from manufacturers in china. It was almost an order of magnitude cheaper
than buying retail.

All up, I would hazard a guess that it’s about 5 figures, maybe more,
maybe less.

Giz AU: I noticed there are a few different vids on YouTube… Have you got different
songs playing on rotation? How many? Do you get sick of hearing the same
tunes?

MS: I have 5 different songs that I’ve synchronised; I was hoping for more,
but it takes about 10 hours per minute of audio to sync (because there’s
~300 channels, and because it’s so precise with the timing). Plus the
introduction/voiceover I did, it runs about 16 minutes all up. I have
the “show” (a fixed order of the songs) running in a loop from 6:30 to

Am I sick of it? yes and no. I listened to each song probably about 500 –
1000 times in the process of synchronising it and preparing it, so I
definitely got sick of them then — but now, I can actually go outside
and watch the fruit of my efforts on display, so I can tolerate them
some more.

Giz AU: What do you do when you’re not programming awesome Xmas light displays?

MS: I work as a software engineer, with embedded Linux network devices (for
Secure Computing — well, now McAfee, since we were bought out). I’ve
also got experience with electronics, embedded development, etc. which
is why I was keen on this.

I’ve also been a muso for a while, so that helped with the
synchronisation and just getting the “feel” of it right.

Giz AU: How long will you leave the lights up for?

MS: Definitely until Christmas, and probably until the end of the year —
depends when people stop coming (or when I get sick of it).

The house is located on Childs Street in Rochedale South up in Brisbane. If you’re anywhere near the area, make sure you check it out.