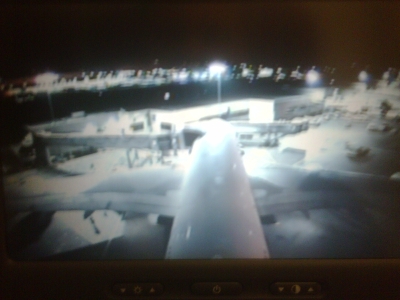 The Airbus A380 has been flying in and out of Australia for over 12 months now courtesy of Singapore Airlines, but for those of you with a preference for flying Qantas, their first A380 has been flying for a couple of months. Lifehacker Editor and perennial traveller Angus just happened to get a seat on one of the new monstrously large planes on a recent trip to the US, and has reviewed the in-flight entertainment experience in his Road Worrier column.Among the highlights:

* While there’s a power point accessible from every seat, there isn’t one assigned to every seat — a group of three seats has two points, so there is potential for arguments if you end up in a row of people all seeking to use their notebooks or charge their phones.

* The most noticeable change is in the in-flight entertainment system, which boasts a much larger screen and uses a touch-screen system to navigate between different options. I’m not sure how resilient the touch screens will be long-term, but they certainly make for a better interface than the ageing Windows CE systems found on Qantas 747s.

* Choosing TV shows and movies is also greatly improved – for TV series, you can select individual episodes, and there are more choices on offer.

* The design improvements also flow through to options such as the in-flight map, which now continuously displays the current time in your city of origin and destination and the duration of the flight — no more waiting for that information to alternate between maps and temperature information in multiple languages.

Any improvement to in-flight entertainment is welcome – I don’t have the pleasure of travelling internationally too often, but when I do, I know that having the ability to power my gadgets is a huge attraction when I select an airline. On the whole, Qantas’ A380 options sound like a big improvement – but make sure you check out Gus’ rundown over at Lifehacker for more.