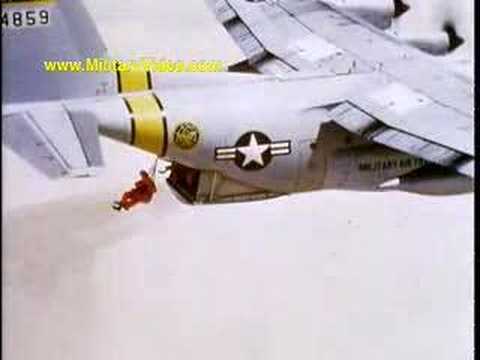 Ah, 2008, you are being a cool year so far, but not as cool as 1958, when the Fulton Air Surface-to-Air Recovery System started to operate: attach yourself to a helium ballon using a nylon cable capable of sustained 4,000 pounds, shoot it into the air and wait until a cargo plane grabs you and takes you into dangerous areas. If you are a special operations soldier, that is. The system began its life as a variation of another crazy scheme used by special-ops in World War II. Then, instead of a helium balloon they used a pair of poles, which were then grappled with a plane towing cable and hook. At the beginning of the 50s, Robert Edison Fulton Jr.—an inventor working for the CIA— thought about using a weather balloon and a nylon line. He presented his invention to his boss, director of CIA technical research Admiral de Florez, who directed him to the military. The Office of Naval Research put him to work and by 1958 the first real Skyhook pick-up took place, when a Navy P2V got US Marines’ Staff Sergeant Levi W. Woods with less shock than a parachute opening.